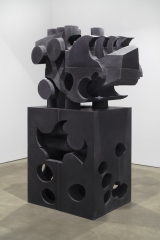 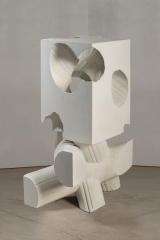 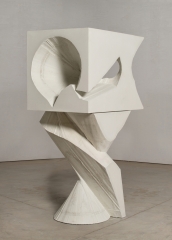 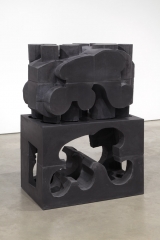 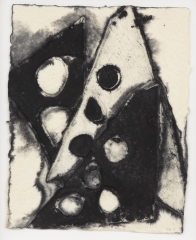 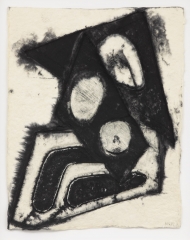 David Nolan Gallery is pleased to announce Mel Kendrick: sub-stratum [nothing is hidden], the artist’s sixth exhibition at the gallery since 2003. On view from October 22 through December 5, the exhibition will include a group of new freestanding cast concrete sculptures, as well as cast paper drawings and a mahogany wall sculpture.

A preeminent American sculptor – considered among the leading practitioners in the medium – Kendrick’s thoroughgoing practice has involved the use of cast bronze, concrete, a variety of woods, as well as investigations with cast paper. Kendrick addresses fundamental questions around sculpture: namely, the relationship between the object as we experience it and the clearly evident means by which it was created. An abiding theme over the years has been the role of a sculpture’s base as not only a practical support or display feature but also as a crucial generative component within the work itself. Kendrick’s process typically starts with a simple cubic volume (resembling a plinth) from which cylindrical or conical forms are unearthed and then set atop or underneath this original element. Guided by the essential properties of his chosen material, the naturally occurring character of wood or concrete can define the direction of the artwork.

Kendrick first began working with cast concrete in 2009, producing “Markers”, a series of five large-scale black and white sculptures that were displayed in New York’s Madison Square Park. With these works, the artist hit upon a breakthrough process wherein a polystyrene scale model could be used to generate each component of the sculpture. Paralleling his earlier undertakings in wood, Kendrick discovered he could apply the same conceptual logic using a handheld hotwire. Cutting freely into a foam model, the resulting elements would be used as molds into which concrete could be poured.

In the present exhibition, a work in the main gallery, entitled Double Bind, sets itself apart in its slate-grey coloring (an effect which is achieved by mixing carbon black pigment into the concrete). In making this work, Kendrick projected a series of cylinders through four sides of the cube. Above sit the multidimensional internal forms: a combination of the columnar structures (excavated from below) and fragments of the cubic volume’s exterior.

The other works in the main gallery are immediately distinct from Double Bind in their use of natural white concrete with polished surfaces. Whereas Double Bind could be said to have the deep grey appearance of geological rock, these other works, by contrast, achieve an effect resembling marble. Two of these white sculptures present one further inversion, whereby the cubic volume (typically serving as the base) is placed on top, rather than below, its internal forms. Using the collective title “Blockheads”, Kendrick suggests an anthropomorphic element typically absent from his large-scale work. A third white concrete work, entitled Clear Ideas, takes its name from a Magritte painting in which a large rock hovers in the sky above the ocean. Serving as a metaphor for a precise thought, this reference takes shape in Kendrick’s sculpture in a boulder-like mass resting over its hollow base. 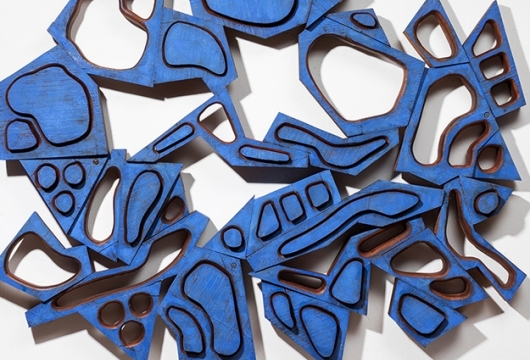