David Nolan Gallery is pleased to present Richard Artschwager curated by Adam McEwen, on view at the gallery from December 10 through January 31. Bringing together a group of landscape pastels and paintings, produced in the final years of the artist’s life, the show will also include paintings from the early 1960s, demonstrating Artschwager’s ongoing engagement with the landscape theme. In hindsight, the early works suggest clear precursors to the strong compositional elements – horizontal lines, roads, cacti – that are present in his output. Together they confirm Artschwager’s unique approach, in which a minimal amount of detail is combined with his unusual sense of perspective. The exhibition is accompanied by a comprehensive monograph on Artschwager’s landscape drawings, with an essay by John Yau.

Excerpt from Into The Desert, published by Black Dog Publishing:

“In 2007, when Richard Artschwager was in his early 80s, he started a new body of work that seemed outside of his practice, surprising even those who paid close attention to what he has done throughout his innovative and challenging career. The late-blooming Artschwager, who didn’t have his first solo show until he was 41, had embarked upon something no one could have foreseen: he began making pastel drawings in warm, earthy, luminous colors. Who expected an artist who painted and drew in grisaille for more than four decades would switch to color so late in his life?

Artschwager began drawing in pastel shortly after he made a trip to New Mexico in 2006. From that time until his death in 2013, he made drawings of a desert landscape in which a mysterious glow often emanates from beyond the horizon. Some of the drawings initially appear to be straightforward compositions consisting of horizontal bands of different colors, textures and widths stacked on top of each other, culminating in a tinted sky. Other drawings are unapologetically weird, as if what we are experiencing is an inexplicable vision, where the possible and impossible meet on a sheet of tinted paper.”

Richard Artschwager was born in 1923 in Washington, D.C. He died aged 89 in 2013, less than a week after the closing his second retrospective at the Whitney Museum of American Art. His work can be found in numerous public collections including The Art Institute of Chicago, the Los Angeles County Museum of Art, The Museum of Modern Art, New York, the San Francisco Museum of Modern Art and Tate Modern, London.

This will be Artschwager’s eighth exhibition at David Nolan Gallery. 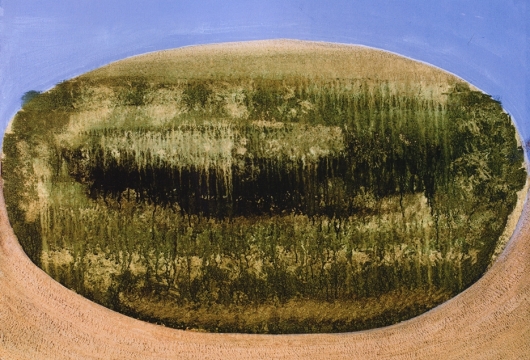