El Ritmo de las Olas (The Rhythm of the Waves) 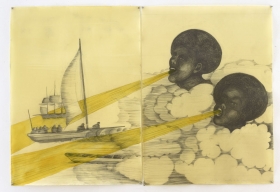 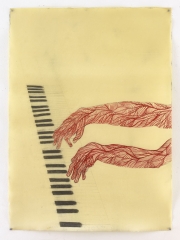 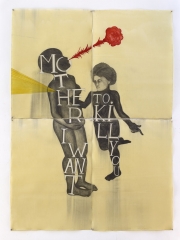 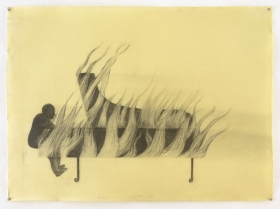 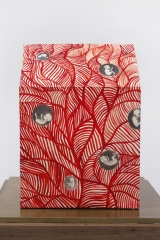 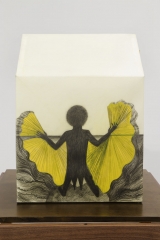 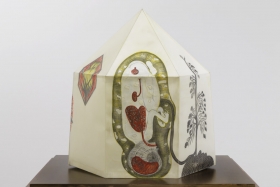 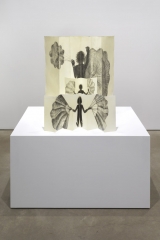 David Nolan Gallery is pleased to announce Sandra Vásquez de la Horra: Crossroads, on view from March 18 through April 30, 2016. For her third exhibition at the gallery, the artist will present a new series of three-dimensional works, constructed in paper with hand-drawn surfaces, along with a group of drawings – all of which continue the artist’s technique of sealing her work within a translucent skin of wax. Throughout her practice, Vásquez de la Horra takes inspiration from childhood memories, dreams, nightmares and the unconscious. The artist layers these sources with her own deep knowledge of European and South American literature, music, and anthropology, along with a profound interest in a variety of spiritual traditions.

The theme of music takes sharp focus in Vásquez de la Horra’s most recent drawings, which present images of musicians engaged in the act of performance. Powerful and highly charged symbols have long inhabited the artist’s work: in this new series the motif of a piano engulfed in flames recurs as a metaphor for, what the artist terms, “the alchemy of music.” In one drawing, entitled Las Frequencias (Frequencies), a dancing figure wearing ballet shoes, conducts an unseen orchestra. (Vásquez de la Horra has described what she perceives as the commonality between musical conducting and drawing.) Depicted inside the figure’s upper body is a small silhouetted figure, representing the soul of music. Another drawing, entitled Los Vientos (The Winds), takes its inspiration from Angelitos Negros, a revolutionary song by the Spanish singer Lola Flores. The drawing illustrates two female figures commanding the wind, who the artist has portrayed as Yoruba people, a West African ethnic group whose widely-branching community the artist encountered in South America.

In her newest drawings Vásquez de la Horra has begun to enlarge her compositions towards a monumental scale, combining multiple similarly sized sheets, which allows a new range of shapes and sizes for her drawings. Most recently, the artist has extended her drawing practice into three dimensions, making discreet structures resembling model houses. Each one begins with the artist drawing on the surfaces of the flattened model, before assembling the structures and, lastly, dipping them in wax.

The inspiration for making “houses” began with the artist’s memories of her childhood home in Viña del Mar in Chile. Situated in the middle of a park, the artist has recalled the tall floor-to-ceiling windows of the modernist building which looked out into leafy surroundings. Imagining herself in an overgrown jungle, Vásquez de la Horra would have vivid dreams at night in which she would interact with lions and wild birds. Referencing the simple structure of her modern home, her “houses” serve as storyboards in which the artist can extend her narratives, exploring ever more abstract ideas. One “house”, entitled El Sueño del Àrbol Rojo (The Dream of The Red Tree), is rendered almost entirely in red watercolor. The work takes the viewer into the realm of the artist’s unconscious where floating embryos are suspended within a genealogical tree.