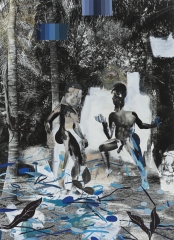 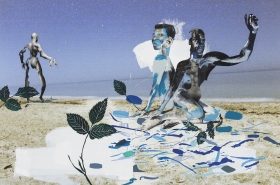 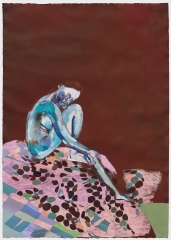 David Nolan Gallery is pleased to present Parisian Landscapes, Blue Zenith, an exhibition of new works by Wardell Milan. For his second solo exhibition at the gallery, the artist has created large-scale collages, paintings, and various photo-based works. The term “Blue Zenith” is borrowed from a passage in Ralph Waldo Emerson’s 1836 essay “Nature” describing “the point in which romance and reality meet," a concept that echoes and unravels across Milan’s latest body of work.

Characteristically diverse in technique, Milan’s practice is conceptually rooted in photography. His image-making across all media finds its origin in photography, as the artist liberally mines from and elaborates on imagery from major historical figures such as Henri Cartier-Bresson and Robert Mapplethorpe, to undersung creators such as Alvin Baltrop, and to everyday sources such as family photographs and the internet. In his unbiased embrace of a variety of sources, Milan levels out classic distinctions between “high” and “low”, encouraging the viewer to attach equal value to a wide range of imagery.

Frequently, Milan uses photographic sources as a compositional starting point for a given work. A new large-scale collage, entitled When he became close to God. (2019), borrows from an arrangement of figures on a beach in a 1930 photograph by Herbert List, assimilating the relative positioning but recasting the main protagonists with new identities. The artist also extends and complicates the original narrative, introducing into the far distance the figure of a priest (sourced from a Eugene Richards photograph),

a naked man seen from behind (via Baltrop), and a group of men engaged in a brawl, which the artist found an image of online.

The themes and subject matter in Milan’s work oscillate between reflections on current world events and a deeply personal meditation on his own daily life. A work entitled Pulse (2019) is named after the Orlando, Florida nightclub, and imagines the moments immediately before it witnessed a deadly incidence of violence. Through the work, Milan considers spaces created by the disenfranchised and how these come under threat. In another work, entitled I can't carry you, you are going to make me fall… (2019), the artist contemplates a series of events in his recent personal life.

A group of photo-based works originated from a residency that Milan undertook in Captiva, Florida. Capturing the beauty of the natural landscape – the trees and beaches – he used a large format camera to document his surroundings. Using this backdrop, the artist worked onto the physical surface of the printed photograph, introducing figures, and a range of gestural marks. The distinctive blue constellations in each of these works reference the unique courtship behavior of the bowerbirds. In this bird family, the males collect brightly colored objects to appear desirable and attract mates. Milan imbues these works with a sense of this tender process, where objects of affection are treasured and exalted. 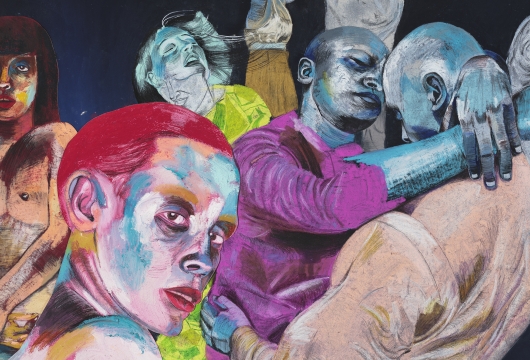 In a time when many artists are content to establish one-to-one correspondences between signifier and signified, sign and meaning, Wardell Milan’s ambiguity is refreshing.

View Hyperallergic
Back To Top